The traditional way of cultivating rice involves flooding the fields before planting and maintaining an important level of water throughout the growth cycle.

Since three years ago, however, IRTA of Mas Badia and certain rice producers of the Delta de l’Ebre and Pals experiment with dry rice sowing and intermittent flooding of the field.

The dry sowing is done in spring, when the field is still humid and allows to defer the water supply for up to a month. And if it rains -says Albert Grassot, producer of organic rice- “a little more.”


When the rice is already big enough, they flood the fields and leave them absorbing the water, and they are filled only when necessary. “Even,” says Grassot, “one can wait for six or seven days” between flood and flood.

All this allows to save between 4 and 6 weeks of water, according to IRTA’s calculations, to delay the waterlogging, and to neutralize the effect of the apple snail so that when it is present, the plant is strong enough to endure. But it is not the only benefit. It also means sowing less, because with dry sowing, there are no shrinkages due to the effect of snails, worms, birds or wind, among others.

It also has some compensation, he warns. It is necessary to compensate the nutrients deficit that implies not permanently flooding the field with a good previous fertilizer, so that the plant can catch it well. We also have to find the way, says the producer, to eliminate the excess of grass, but we are still working on it.


“We started with some test field, this year we have already cultivated 70% of the fields with this system, and next year it will be 100%.”he anticipates. And the production? “Not only has it not gone down, but it has increased a little.”

We are also starting to experiment with drop irrigation, but here, says Grassot, the field to run is still large. “You have to invest in irrigation tubes, you have to see how they are put so the machinery will not damage them, and you have to water constantly… however, it has an advantage: the tube can pass water while mix the fertilizer.” It is a system that, in his opinion, can go well to implant the rice in territories where it is now unthinkable but it will only have future when the saving in water compensates the extra investment that must be done.

IRTA also encourages savings in apple farming through the “Giroreg”. Here the reduction of water use is of 20%, and it is obtained thanks to the forecasts that are sent to the producers so that they use the water that, strictly, is necessary. 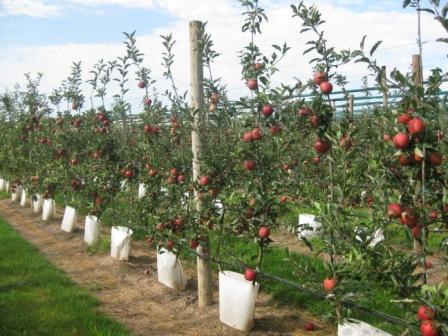 A wall of apples. Photo: IRTA

The exact dose is obtained from the samples collected systematically in 42 specific fields. They are a series of parameters - for example, the amount of water in the soil - that are sent via GPS to a computer program that applies the sieve of the weather forecast before making corresponding calculations.

In summer, anti-hail nets are also used to limit the impact of solar radiation. It is estimated that 50% of the surface of the PGI Apples in Girona is covered with anti-hail nets.