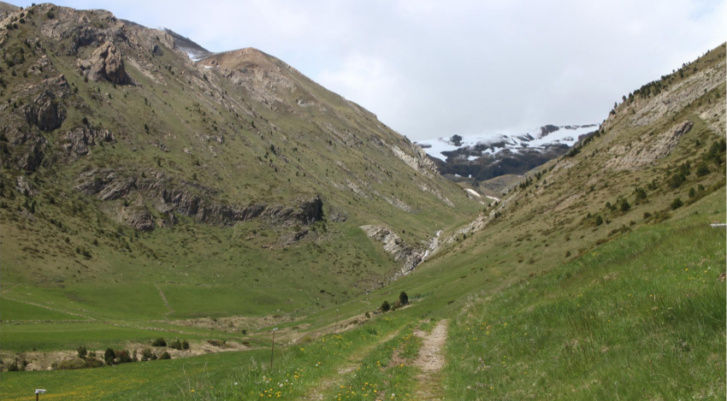 Jordi Montilla, Student of Geology Degree - University of Barcelona
The creation of deltas from glaciers.
When thinking of delta, what comes to mind is the image of a set of sediments deposited at the mouth of a river. Curiously, the southernmost part of Catalonia is formed by one of them, namely the Ebro Delta, where the mouth of the Ebro river is located.

When thinking of delta, what comes to mind is the image of a set of sediments deposited at the mouth of a river. Curiously, the southernmost part of Catalonia is formed by one of them, namely the Ebro Delta, where the mouth of the Ebro River is located.

In this case, a delta that is formed by the largest river in Spain, and that receives its sediments from the Pyrenees, the Iberian System and the Cantabrian Mountains. But, what if they were formed in other conditions, such as in mountainous areas, places where temperature was low enough to ultimately cause the formation of a glacier? from which, a deltaic build-up could be created.

Photograph of the Montaup Valley (Andorra) where you can see the small delta formed on the left hand side of the picture and the river that has been exposing the deposited sediments in the center of the picture.

In order to discuss this fact, we have to go back to the Pleistocene, concretely about 31,000 years ago, when the glaciers, according to Bordonau (1992), had a maximum extension in the central Pyrenees. In this area of the Andorran Pyrenees, some of the glaciers could be 300 meters thick estimating the distance between the highest peaks of some lateral moraines and their corresponding valley bottoms. Later on, after several fluctuations of the globe, it reaches a point, about 16,000 years ago, in which glaciers only remained in the lower parts of the valleys (valleys glaciers). At that moment, some secondary glaciers began to weaken, being disconnected from the main ones. This article refers to a small valley of Andorra, focusing on the main glacier of the "Valira d'Orient" and its disconnection with the secondary glacier that advanced perpendicularly through the Montaup Valley (Andorra). Initially these two glaciers were connected and they formed a series of “tills” (sediments of origin glacial), probably subglacial ones, that can be observed on the CS-240 road rising from Canillo towards the Montaup Valley. This indicates that in that area there was a glacier that eroded, transported, and deposited these sediments. Little by little, the front of the secondary glacier receded, just like the main one, while the secondary glacier kept its significant thickness and its lateral moraine gained height. The secondary glacier kept melting and its waters reached the lateral moraine where they remained stagnant, forming a lake of obturation where lacustrine sediments deposited. Besides, the occasional rainfall can generate torrents that transport torrential sediments, reaching the lake and creating a lateral facies change (set of sedimentary or metamorphic rocks with specific characteristics, whether paleontological or lithological that help to recognize the sedimentary or metamorphic environments, respectively, in which the rock was formed) between these two types of sediments. With the passage of time, the lake was filled with these sediments, leaving less and less space for the water, while deltaic sediments were deposited horizontally as shown in the figure. Once the lake was filled with sediment, an altimetric height that is equal to, or practically equal to, the one of the lateral morena was reached. Over the years, the Montaup River, a tributary of the "Valira o'Orient", has eroded this reservoir and left some of these sediments in sight. 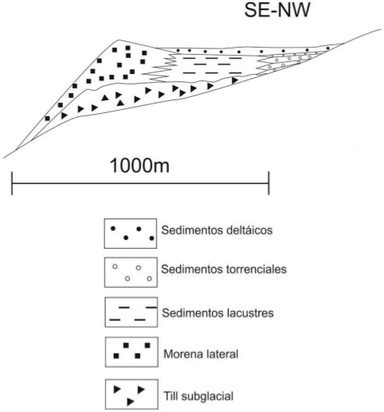