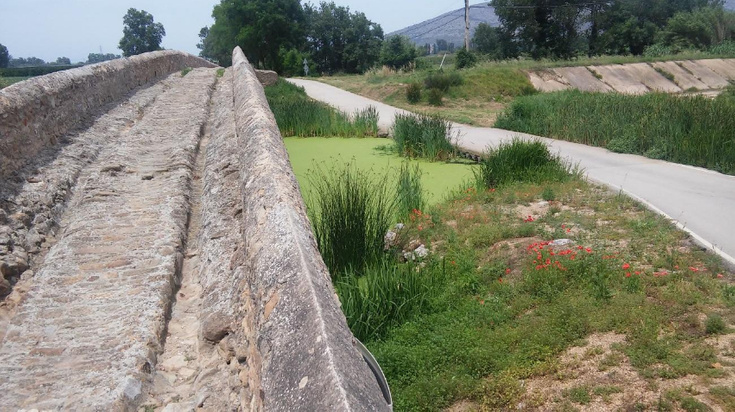 Basically, I want to make reference to the area that corresponds to the right bank of the lower river Ter, when it passes through the municipalities of Torroella de Montgrí and Gualta and the river Daró which, after passing the latter, ends at the beach of Pals. I decided to put myself in front of the computer to write some reflections after noting that during the summer, our wells become dryer and dryer, while this area historically had an underground sea of fresh water. I have been verbalizing this for a long time, and it can probably be of interest to write them down and make them known:

Does it rain less or we get wet less than before? When I was 11 to 18 years old, I went to school in Torroella (3Km from Gualta) by bike or “Vespino”. No doubt I suffered and was aware of all the rains. Which child or boy of this age does not go to school by car today? Do they get wet? How much time do they see raining?

In the following table, which is from one of the oldest weather stations in Catalonia, L'Estartit, managed and controlled by Josep Pascual, we can see that the average rainfall from 1967 to 2016 is still 500 to 600 l/year. With large fluctuations, which is typical of the Mediterranean countries, it ranges from 266.7l in 1973 to 985.7l in 1994.

Why do people lie to us saying that there is less water because it rains less? What really happens is that the water tables are not filled enough. Today, The river Ter ends in Barcelona. A part of the river Daró and the irrigation canals are channelled and made watertight. With all this, the water table is never filled. Besides, since the people of this area know it well, they take a great amount of water from the wells, at great depths, which goes to the tourism of the Costa Brava.

In the image, it is the river Daró during the Spring and Summer of 2016. Filled with seaweeds. The water barely moves. Before, the irrigation of Molino (water coming from the river Ter) still provided certain flow. Nowadays, this water goes straight to the Pals and to the sea because of the recently constructed new irrigation canal . 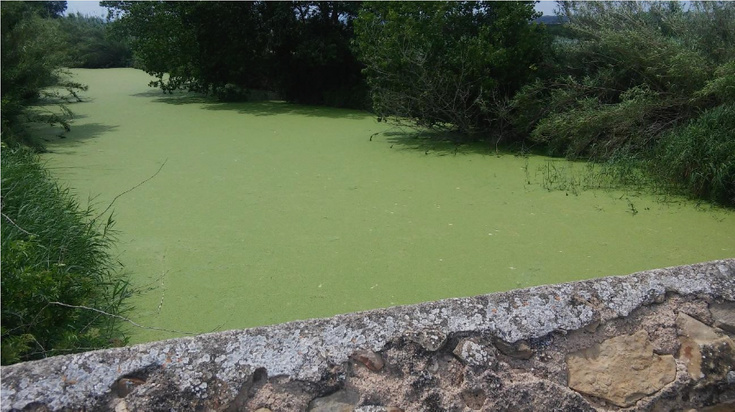 Daró May 2016. Stagnant water with seaweed.

Why are there fewer floods? Before, we had water of few meters deep, no matter how little it rained, we always had the “drunk” terrain. The water of the river Daró and the Ter, which is plugged by garbage, spread and flooded our soil. Now, how many liters should it rain to fill our dry subsoil? The wells are already more than 20m deep.

I feel bad when I hear people saying that the water is an exhaustible good; Perhaps it is limited. We cannot “create” water, neither can we “destroy” it. In any case, it just transforms and today it “gets dirty”. Have we stopped to think that the water we drink is what the dinosaurs drank and “pissed”? It is the same in different ways (liquid, vapor, ice, ...) for millions of years.

If the city of Barcelona was located in Vic geographically, today we would not talk about the lack of water. All that goes to the sea would return down to the Ter and Gerona, reserved and quiet as always, and we would continue using it.

I am tired of hearing that our farmers are the ones to blame for the water deficit, while they are the ones who bring back to the soil the water that comes from it. Let's think that every time in Barcelona when people flush the toilet, which is done more than once a day, it sends the (purified) water to the sea, which corresponds to watering 1,000 Ha of fruit trees. let's take into account that, these trees only need watering during 4 months a year. If the water was saved, we would have enough water for 3000 Ha of fruit trees in Gerona everyday. Unfortunately, it goes to the sea, or to the mouth of the river Llobregat, without filling the corresponding basins.

All the towns of the Ter valley consume directly or indirectly the recycled water (or not) of the previous town. Why can not a big city give back the water it throws into the sea? I mean, recycle it?

We should realize that the important thing we have achieved in recent years is that the Ter ends in Barcelona, without seeing or touching the land that it should “fill”, and that it only passes through a series of closed tubes. It only comes out of a water tub when we need to wash our hands, shower or flush the toilet at most.

The watertight irrigation canals, while they are very efficient regarding to preventing the water loss, they also prevent our water tables from filling up and they make them lower everyday. Actually, it forces us to water even more in order to maintain our crops.

Daró January 2017. The water passes through the watertight canals (left), while in the channel (right) it would let the phreatic full, which barely circulates.

I would like to invite you one day to the mouth of the river Daró (also called "the irrigation of Molino"). You will see the amount of the water coming out. It had not come out so much before the canalizations, and all this stops filling our soil. 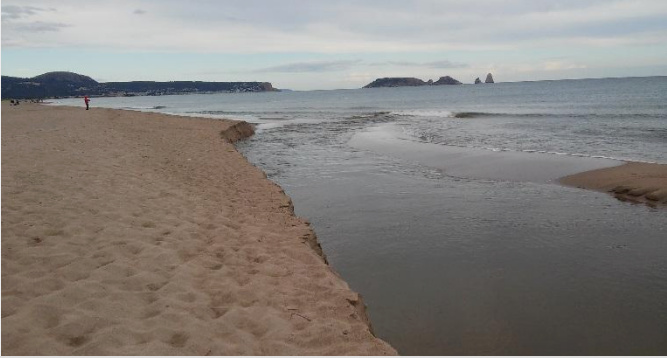 Beach of Pals. Gorge of Daró, exit from the Riego del Moli. Summer 2016

Now people insist more on using drip irrigation. Although it is one of the most technically efficient systems, it should be taken into account that it does not contribute to the filling of our subsoil. And oftenly, because of its ease of use, it consumes more water than traditional irrigation.

I do not want to offend anyone, but only make an act of reflection on the use, distribution and recycling (on what we insist so much) of the most essential good of our planet.

We can all be ecologists while we have water in the water taps and our belly full!!!